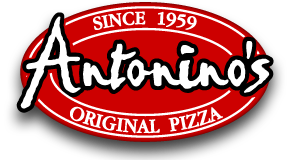 Top Choice Pizzeria of 2020 in Windsor

Today, more than 30 area pizzerias can trace their roots directly back to Antonino's original pizza recipe.  Those roots are strongest, however, at Antonino's Original Pizza.  In 1999—in tribute to his father and with the assistance of his mother Vita—Joe Ciaravino opened the first Antonino's Original Pizza location at the corner of Howard and North Talbot Road. Joe started working in the family pizzeria when he was very young.  "My Mom put my playpen next to the pizza table when I was a baby.  You could say I started learning the pizza business before I learned to walk," he says, with a smile.

Today the South Windsor pizzeria, along with our second location on Manning Road in the Town of Tecumseh, are the only pizzerias owned and operated by the Ciaravino family.

A strict devotion to Antonino's original recipe, combined with an unyielding insistance on using nothing but the best quality ingredients, has created a loyal following of pizza connoisseurs who know that the proof is in the pie.  We use Antonino's original recipe and spare no expense in finding the freshest, finest, and where ever possible, local ingredients.  We use Five Roses Flour for our dough; fresh packed vine ripened tomatoes in our sauce and 100% whole milk, Uniondale mozzarella made right here in Windsor by the Galati Cheese Company.  Our shredded pepperoni is lean and loaded with flavour and we use true centre-cut, premium bacon.  Our fresh produce is purchased locally from D. Pearl & Sons Produce.  We never use frozen!  Mushrooms—fresh or canned, your choice—same price! Anchovies on the side?  We give you the whole can.

Our crust: thin and crisp since 1959.  No thick, doughy ends to throw away!  Your pizza is hand made from dough that goes through a multi stage proofing process.  We bake it on cornmeal directly on a stone hearth—no screens or pans are used.  The only thing separating the crust from the hot stone is a thin layer of cornmeal (and that's how you get that cripsy crust!).  Our dough contains no sugar or other browning agents—no cheating allowed.  The deep, golden brown colour is achieved by extending the bake time... we will serve no pizza before its time!  Because the crust around the edge of your pizza is thin, you get more actual pizza (more toppings) and less crust.  Your toppings are evenly spread from thin edge to thin edge, so you get the same great flavour in every bite.

It may have been dished up from a variety of restaurants over the years, but the recipe that helped solidify Windsor's reputation for having some of the best pizza in the world, is now over a half century old and still being lovingly followed at our two Antonino's Original Pizza locations: 4310 Howard Avenue in South Windsor and 1695 Manning Road in the Town of Tecumseh.

Are you the owner of Antonino's Original Pizza?